The 2015 edition of the World Wide Haxe Conference, aka WWX2015, organised by Silex Labs is coming soon! It will take place in Paris, hosted by Mozilla Europe and sponsored by Game Duell, Tivo, Mozilla, Haxe Foundation, Massive Interactive,  Bayer und Preuss, UFO, Wyzapps. Special thanks for the communication and visual design to Pol Goasdoué, Nicolas Masson and Emmanuel Waras.

You’ll find below the links to register for the workshops, the Schedule for Saturday and Sunday and the speakers announcement article written by Valentin Lemière.

Monday will be a workshop day, you can register now:
« A Gentle Introduction to Haxe Macros » by Juraj Kirchheim and Jason O’Neil.

« How to develop frameworks with the Duell Tool? » by Sven Otto and Rui Campos.

If you can’t come to WWX2015 don’t worry, you can still catch all these great talks on the live stream and our live tweet on twitter.com/silexlabs or our hashtag #WWX2015. Feel free to ask questions on twitter, we’ll ask them for you to the speakers. And if you miss that too, you’ll be able to watch all of the talks on our Youtube channel at youtube.com/user/Silexlabs shortly after the end of the conference. Find all the info you need at http://wwx.silexlabs.org/2015! 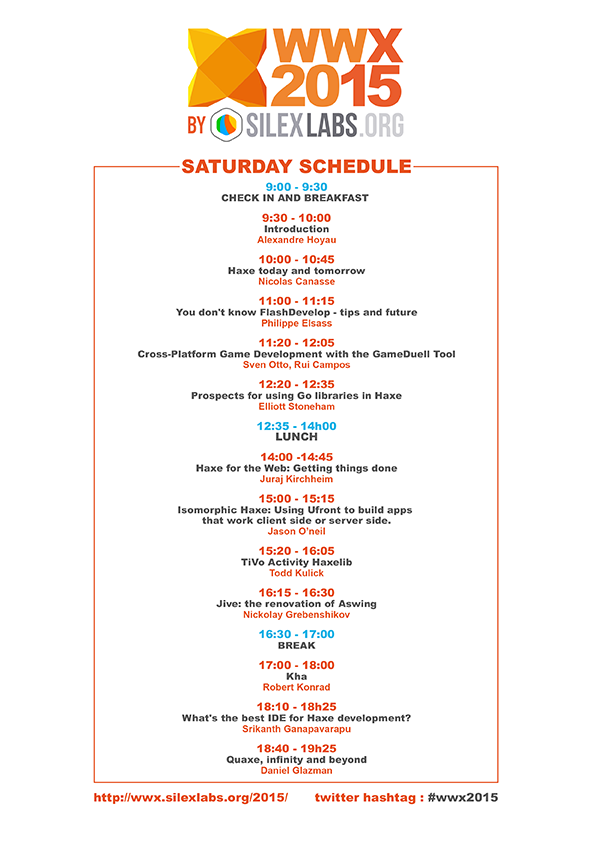 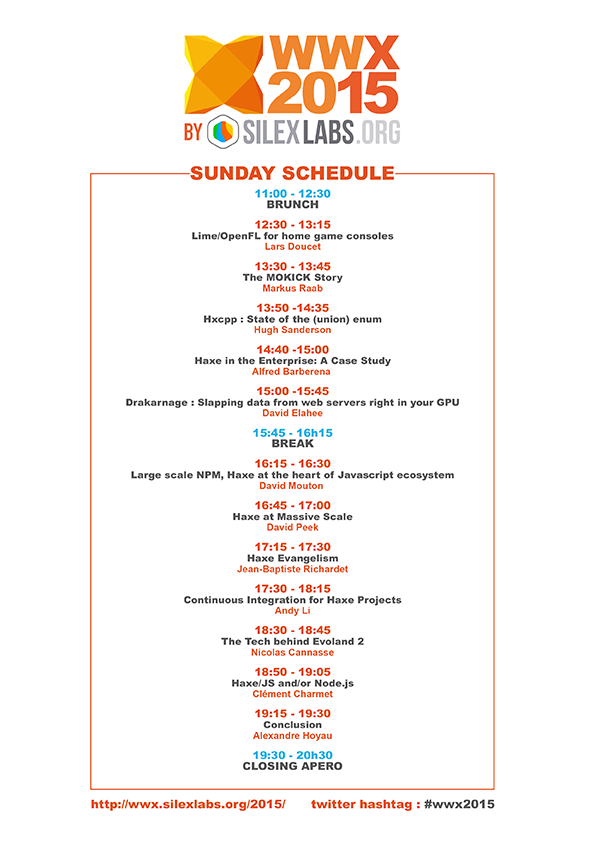 The crowdfunding campaign was a success, we will be able to have a great haxe conference from May 29 to June 1st (friday: social activities; saturday & sunday: conference; monday: workshops), live streaming, a recorded version put online after the conference, welcome aperitif, sunday brunch and open bar saturday night party. Thanks everyone!

Haxe continues to grow and in the talk “Haxe today and tomorrow” Nicolas Cannasse will present the latest changes that were introduced in Haxe as well as Haxe Foundation plans for the future.

The c++ backend saw changes too in the last year. Hugh Sanderson, in his talk “Hxcpp: State of the enum”, will take you through a tour of the current state and future directions of the hxcpp target. With tighter native integration for the more nerdy developer and better scripting integration for the not-quite-so-nerdy developer, there should be something in talk for everyone.

Haxe targets a lot of languages, but what about targeting Haxe? That’s what Elliott Stoneham do in his TARDIS Go -> Haxe project and in his lightning talk “Prospects for using Go libraries in Haxe” he’ll talk about the potential re-use of Go libraries in Haxe with examples ranging from Unicode normalisation to image inspection, he can promise you probably the only talk with speaking-in-tongues and nudity (not him).

All this Haxe development require an IDE as great as the Haxe language, but “What’s the best IDE for Haxe development?”. In this lightning talk, Srikanth Ganapavarapu will share a short survey of existing IDEs but mainly an overview of progress made in enhancing Haxe language support in IntelliJ IDEA, the work done and the roadmap ahead. This session will help the audience appreciate why it makes sense for the Haxe developer community to adapt IntelliJ IDEA as their first choice – be it for enterprise level development needs or as an individual programmer.

Or maybe you’d like to or already use FlashDevelop, then like the majority of users you probably don’t know how it works, there is a lot of magic happening under the hood. In Philippe Elsass’ lightning talk “You don’t know FlashDevelop – tips and future” he’ll speak about the lot of things that changed in the last two years with a strong shift on Haxe, high-dpi screens and maybe someday MacOS support.

As an active member of Silex Labs Jean-Baptiste Richardet is dedicated to make the community grow, convinced it will lead to a brighter future. He will tell us in his lightning talk “Haxe Evangelism with Silex Labs” what his dedication involved, including teaching students, making demos in front of professionals and creating bridges between open-source communities.

With a very strong current focus on the Gaming industry, Haxe remains unknown outside of that inner circle. App developers outside of that industry lack important foundations to let them approach the Haxe environment, and the Haxe ecosystem remains a bit too unclear to them. Daniel Glazman willl explain his views in the talk “Quaxe, infinity and beyond”, almost with an external eye, of the situation and how it could be fixed.

Want to know why a UI library is important for a community? Then Nickolay Grebenshikov‘s lightning talk “Jive: the renovation of Aswing” is for you. He will share his opinions about UI libraries, why they are important and what feature they should have. But he will speak mainly about Jive, a cross-platform UI based on AsWing, and explain to people where it comes from and go to. He will also make a small comparison of HaxeUI, StablexUI and Jive.

Following on user interface Alfred Barberena in the lightning talk “Haxe in the Enterprise: A Case Study” will present a quick update on Tivo‘s experiences using Haxe for user interface development on set-top box and mobile devices. He will cover the challenges experienced and lessons learned in such areas as performance measurement, API “cheating” for performance, memory leak tooling, and memory churn optimization. He will also briefly discuss the consumer reception of their Haxe-based releases and share some consumer satisfaction metrics.

Tivo doesn’t stop there, in “TiVo Activity Haxelib” Todd Kulick will present the conceptual design of its activity haxelib, which provides an event-driven programming paradigm with asynchronous triggers allowing multiple coordinated contexts of execution within a single program. In addition it allows increased performance on some platforms via the use of multiple threads while falling back gracefully to single threaded execution on platforms which do not; all without requiring any target specific code. This talk will present APIs allowing the creation of and communication between activities.  It will also provide examples of how the activities paradigm can enable the ability to mix multiple, previously incompatible or difficult to combine haxelibs within one program.

Sven Otto and Rui Campos will introduce GameDuell’s custom Haxe tool for the first time in public in the talk “Cross-Platform Game Development with the GameDuell DuellTool”. Developed from scratch by the Berlin-based game developer’s team the DuellTool provides a configurable build system, dependency resolution and a versatile developer environment setup. They will present how the tool, made to cater the cross-platform development of casual games for the Facebook iOS and Android platforms, gives platform specialists a handy workflow to seamlessly contribute to the same API’s. Further, they will share their approach for the modularity of libraries and how they defined the platform abstraction layer to provide an efficient and maintainable development process.

If you are using Lime/OpenFL then this next talk should be of primary interest to you, “Lime/OpenFL for home game consoles”. Lars Doucet will show you a cross-platform, home game console backend for Lime/OpenFL, which will bring compatibility for WiiU, XBox One, PS4, PSVita, 3DS, etc. And if you are using an other Haxe framework this talk will also have valuable information if you want to add console compatibility.

OpenFL is often used to make games but it can be used for any visualisation, like in MOKICK an offline content management system and authoring tool which provides an easy and unified way for creating content of any kind – usable everywhere. In his lightning talk “The MOKICK Story”, Markus Raab will show you the basic concept of the underlying graph based data model, how the editor made in OpenFL creates his views based on project specific data rule sets and content, how the PureMVC layer enables easy batch task implementation and how all this applies to a real world project.He will further give you a brief introduction what occurrences and experiences during a long history of project developments finally led to the decision of rethinking everything, why his company now uses Haxe and what the future plans for this project are.

While Lime/OpenFL is well known it’s not the only framework for games and media applications. “Kha”, a talk by Robert Konrad, gives an overview of the history and inner workings of Kha and discusses its many benefits and few problems.

The lightning talk “The Tech behind Evoland 2”, by Nicolas Cannasse, will introduce the different technologies that were used to develop Evoland 2. An upcoming game by Shiro Games involving both 2D and 3D graphics, written entirely in Haxe. All of them available as open source, as well as the workflow the team of 9 people used to build the game.

But Haxe isn’t just useful for making games, in “Haxe for the Web: Getting things done” Juraj Kirchheim will show how Haxe can be used not only for complex long term projects, but also for quick and dirty prototypes and rapid application development. A pragmatic approach to Haxe based web development, particularly on the client side.

Why choose between the client site and the server side, most web-apps need a combination: server side rendering is great for a fast first page load, backward compatibility and search engine optimisation. And client side rendering makes the rest of the page loads feel instant, like a native app. Jason O’Neil will show how Haxe and Ufront let you get the best of both worlds in his lightning talk “Isomorphic Haxe: Using Ufront to build apps that work client side or server side”.

Nothing says web app development like Javascript, and NPM is at the center of it. Coffeescript and Typescript are perfectly integrated and have offered a real alternative to full Javascript development. For almost a year now, Haxe has constituted a third alternative in this ecosystem. In his lightning talk, “NPM, Haxe at the Heart of the Javascript Ecosystem”, David Mouton will look at why Haxe is a very relevant option. He will introduce its current state of integration, functioning and improvements to come.

One example of Haxe as an alternative to Javascript is Haxe JS Kit which will be demonstrated by Clément Charmet in his lightning talk “A walk-through of Haxe JS Kit” showing the main features from MongoDB modelling to ReactJS integration, isomorphism, NPM integration, and more generally, ways to quickly build solid full stack applications.

David Elahee will present in “Drakarnage: Slapping data from web servers right in your GPU” the data flow of drakarnage alongside some sample of what Haxe can achieve. The data flow is interesting because ultimately they have a pretty long roundtrip longing from sql, mongo, siding by redis and going back to a custom HTML renderer optimised for mobile GPU’s.

Convinced to make a project with Haxe? Then make sure to not introduce bugs in it, in the talk “Continuous Integration for Haxe Projects” Andy Li will present how to set up continuous integration (CI) services, like TravisCI and AppVeyor, to automatically test code for every commit. As well as discussing some interesting use of CI that could be useful when building games, mobile apps, websites or even when writing novels.

Massive Interactive was convinced and in the lightning talk “Haxe at Massive Scale” David Peek will present a whirlwind tour of the clients, platforms and devices where they are leveraging the awesome power of Haxe, and some of the problems they’ve solved in getting there.

more info about the speakers: http://wwx.silexlabs.org/2015/speakers.html

Thanks to Valentin Lemière for this article