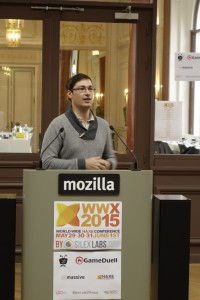 Nicolas Cannasse is the original creator of the Haxe language and he is now directing Haxe Foundation. He is also the Co-founder of Shiro Games and a Game Developer.

Evoland 2 is a brand new game created by Shiro Games, involving both 2D and 3D graphics, and entirely written in Haxe. In his speech “The Tech behind Evoland 2”, Nicolas Cannasse presents Evoland 2 and introduces some technologies that were used to develop the game, and which are all available as open source, as well as the workflow the team of 9 people used to build the game.

Evoland 2 is now available on Steam, GoG and the Humble Store! Have fun! http://t.co/UkKUybKpks pic.twitter.com/cGwaO7tZey

Here is a quick preview of the #Evoland2 Artbook! #games #indiedev pic.twitter.com/UnSUYrJjZI