Jason O’Neil is the co-founder and developer of Today We Learned. He uses Haxe to make web apps for the education market.  After going « full time » with Haxe in 2013, Jason built the Sheridan School Management System for a network of Australian schools using Haxe and Ufront.  Now he’s focusing on Today We Learned, a web and mobile app that guides teachers in a 60 second update to send to parents – and participated in Perth’s first ever seed funded start-up accelerator.  In the Haxe ecosystem Jason is known for his work on Ufront, the Haxe website and Haxelib, as well as spending far too long answering questions on Stack Overflow.  When he’s not programming in Haxe he’s probably asleep, dreaming of macros within macros. 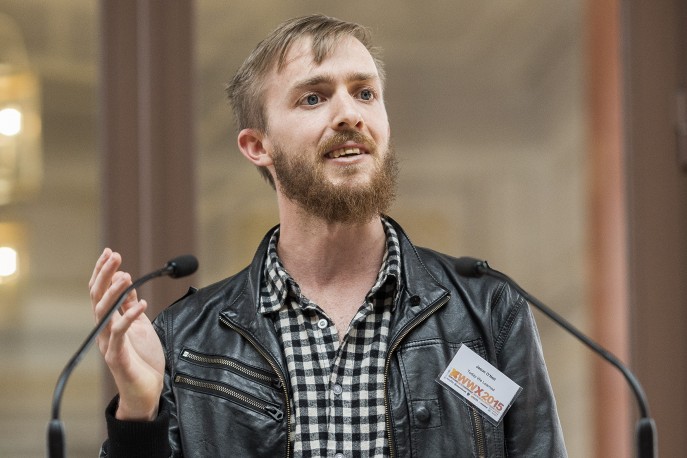 Most web frameworks do their work on either the client or server. But most web-apps need a combination: server side rendering is great for a fast first page load, backward compatibility and search engine optimisation. And client side rendering makes the rest of the page loads feel instant, like a native app. Jason will show how Haxe and Ufront let you get the best of both worlds.

The presentation has been made on the website Ufront.net.

Jason O’Neil: « Being part of the WWX Haxe conference this year was a real privilege. So many game-changing ideas, people working on great projects, and great ideas buzzing around the different groups of delegates.  I definitely left feeling inspired with some of the projects that were shared, ideas that were explored, and people that I got to meet with.  Lots of fun, lots of code, not much sleep.  Can’t wait for WWX 2016. »

@JbIPS @jasonaoneil i also liked the theme of it 🙂 very nice presentation, i look forward to test ufront #wwx2015