The speakers will come from all around the world, and we will be united once again to share the best of haXe community, of our projects and experiences. Talks and demos will show how active we are and how multiform our favorite programming language is.

Everything is still to do for this event, from organizing our evenings to planning the conferences and prepare a small press release. We must shape this unique event up! You have all got to be part of the staff, before, during and after the event, in order to co-organize, then give a hand there and then communicate about what has happened. So join “the staff” working group here and right now! 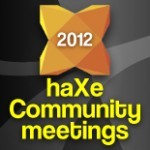 Another group has been formed, called “the board”. The mission of its 10 members is to help us to take decisions and to arbitrate so that we can move forward quickly. Let’s show them how motivated we are, let’s discuss, brainstorm and act together, making it the best time for haXe users to meet, learn and collaborate with haXe.

See you there, fellow haXers!
Lexa for Silex Labs.