French and open, haXe in Silex / Silex in haXe

Hello This is a technical article on the use of haXe to develop animation layouts for Silex publications. I will explain why I find it very interesting to use haXe in Silex development team and then explain how I reproduced the minimal layout in haXe (little explanation and source download).

haXe is an open source & multiplatform programming language. A code written with haXe can be compiled to JavaScript, Flash (AS2 & AS3), PHP and NekoVM.

Open and French first of all ;-)

Multiple language, one code base

It seems to be much efficient to use haXe than Flash to publish swf, according to Joacim…

haXe opens new perspectives for Silex, like the use of the numerous libraries for 3D redering, 2D physics, support of pdf (decryption only), zip, …

How to develop page transitions in Silex with haXe ?

Here I will not make a tutorial because I am not good at this :-( Instead I will explain the overall philosophy and use of Silex API. You can look at these sources in order to see how I implemented

Here are the classes you need to implement in a Silex animation layout..

The class interacting with Silex API

The class accesses Silex API thanks to this haXe code: var timeline:MovieClip = Lib.current;

It will use the Silex API in order to register the layout and its layer, i.e. say to Silex: “hello, I am a layout and here are the layers which I contain”. For this, use

[caption id=”attachment_1643” align=”alignnone” width=”201” caption=”After these calls, the layout will then be initialized and recognised by Silex for load, save operations etc. The layer will be visible in the “pages” tool box.”] 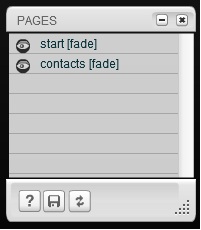 Can be MovieClips or any object with the method “play()”.

One or more classes in which you can implement the animation(s). For example a fade can let the content of the page appear. This class has to have at least the method “play()” which is called by Silex.

The animations can change the layers appearance - the layers you registered and which contain the dynamic content, i.e. the user  media.